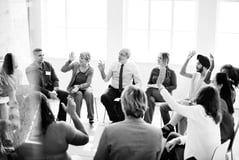 On the 8th of May, there is a strong possibility that the UK will be facing a second coalition government. For the health of the Nation - and the economy - the ability of that group to govern as a collective will be absolutely essential. The question is: what can they do to create a One-Team culture?

A One-Team culture is a truly seamless entity, whereby the whole proves more important than the individual stars. It’s all about collaboration, teamwork, a lack of boundaries, trust, support, sharing and treating each other as customers. The passion of any One-Team culture lies in working together to produce outcomes.

As human beings, we inherently desire to operate in a group. If we think back to man’s tribal days, when we didn’t fit in, we didn’t survive; it has been genetically bred into us to gravitate towards group membership. Whilst this is still true, we also love to segregate our team membership. In 1971, a researcher, Henri Tajfel, ran a seminal experiment. Boys were randomly allocated into two groups, labelled Klee and Kadinsky, after early 20th century artists. When asked to allocate rewards to each group, the boys exhibited strong favouritism for ‘their’ group, despite the fact that, beyond a randomly allocated label, they had neither met nor socialised with any of the boys in their group.

As human beings, we are strongly disposed, even under minimal circumstances, to prefer our own ‘group’. Now layer that with history, ideology, relationships and politics, and the complexity of creating a One-Team culture in the coalition party increases exponentially.

Here are 5 tips a new coalition government could take on board from Day 1 to help them move in the right direction:

When the coalition is formed, it will be comprised of groups that have existing patterns of behaviour (their own culture). Being clear on what behaviours are acceptable and not acceptable within the context of the coalition as a new entity will be critical to define early on. By defining this upfront, the group will avoid any of the misunderstandings and mismatched expectations that can cause so much unnecessary friction and conflict. Actively providing feedback to each other from day 1 will help to shape the group and set powerful new norms of operating.

We operate at our best in teams when we function to a superordinate or overarching goal. A goal that is aspirational and purpose-filled. The new coalition could do well to agree on some big, aspirational, purposeful goals that they would like to achieve together, above and beyond the minutiae of government.

Tip 3. Learn how to do both/and

Life is a series of trade-offs and there are dynamic tensions at play at all times. Never is this as salient as when we are bringing two groups together with two separate interests. The ability of the new coalition to work from a space of ‘how do we do both/ and’ versus ‘either/or,’ will be defining for them. The first is a hallmark of abundance thinking, when the parties believe that they have many resources and options to draw upon. The latter ‘either/or‘ thinking comes from a place of scarcity, where people are fearful and few options are perceived. The group need to at least start from this abundance place and look at the range of options that are possible. At a minimum, the new coalition should be open and frank about the dilemmas and trade-offs they will need to deal with.

Tip 4. Learn how to compromise with grace

There is theory that one of the reasons Barack Obama has not been able to achieve as much as hoped in his presidency is because he joined the White House without ever having been a Washington insider.This meant that he owed no-one and no-one owed him. There is a powerful dynamic that comes into play when we do favours: the dynamic of reciprocity. When we help someone out, they are psychologically predisposed and compelled to return the favour. Whilst compromise can feel as though you are taking a back step, a bit of graceful compromise can create a positive and forward-moving team.

There is a magic rule in teams and relationships regarding the ratio of positive to negative feedback [1] that the new coalition government would do well to heed. The biggest single determinant of a marriage surviving or a team being successful is the observation of this ratio: 5 positive comments (well done, I like that idea, I agree) to every 1 negative comment (that’s a dumb idea, we shouldn’t do that, that will never work – this includes sarcastic comments). Positive comments create positive energy and encourage openness, which builds trust and fosters an environment where people are positively disposed to work with each other.  It’s easy to make sarcastic, throwaway and disparaging comments when two groups are different. However, for the sake of the bigger play, the coalition will need to learn to be a bit nicer in their interactions.

A government, like any organisation, will always be more likely to succeed once it establishes clear cultural goals. For the United Kingdom, any possible coalition would serve us well to make that goal a One-Team culture.

What are your top culture tips for a Coalition government?

Have you seen a One-Team culture at work? What did you observe?

Amanda is Executive Director at Walking the Talk.