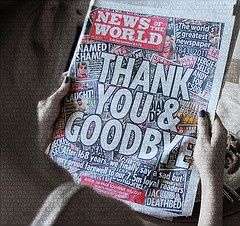 My Kindle is full of stories of the demise of the British tabloid News of the World, closed down this week by James Murdoch when the practices used to obtain stories became fully exposed.

The business pages talk of whether the imminant purchase of BSkyB by News Corp will now be in jeopardy.  At the heart of this decision will be whether News Corp and its key directors are considered to be "fit and proper" to move into a more dominant position in British media.

Under investigation is who knew what as News of the World journalists and paid private investigators paid police for information and hacked into private mobile phone voicemails, including those of a murdered school girl and the parents of victims of the London tube bombings.

In my experience, events like these are spikes within a background culture where certain standards and behaviours are condoned, encouraged or at least not eliminated.  Individuals do not carry on such patterns of behaviour in organisations where leaders take standards of behaviour seriously.  People pick up messages about how they are expected to behave through what they see around them.  These incidents are part of a core process in media organisations -  how information is sourced which allows them to break stories.  Top leaders who do not ask questions about this whilst simultaneously putting pressure on their people to deliver more and more, are passively encouraging an "anything goes" environment.  The higher the temptation to act unethically or illegally, the more active leaders need to be in setting standards and continually testing to ensure they are met.

The more senior a leader is - including directors who sit on the board - the more vigilant they have to be to explicitly and continuously hold their people to account for behaviour as well as results.  Without ever having worked at NewsCorp, I would consider that this responsibility lies as much with Rupert Murdoch and James Murdoch as it does with the editors and journalists who were close to the action.  By appointing and supporting key executives such as Rebekah Brooks, they are saying they are confident in her ability to run the business, and in doing so are revealing their own values hierarchy.  These values would also be sure to influence other publications owned by News Corp such as The Times.

It may well be true that key individuals did not have specific knowledge of specific illegal events.  But it was their responsibility to set and monitor behavior in a way that they would have known.  This is what managing culture is about and it is a part of being a "fit and proper" executive.

As we watch how this series of events unfolds, consider the extent to which certain behaviours are actively or passively encouraged in your organisation.  Do those at the very top understand the performance and reputation risks culture creates? Do they know how to ensure that the level of pressure to behave to agreed standards is as rigorous as the pressure to deliver short term performance?  These is do-able, but it requires awareness and discipline.  Recent events at News Corp  serve as a reminder of the performance impact of not managing these risks.