Microsoft: finding the swing for your team

Satya Nadella, the new CEO of Microsoft, sent a memo to the organisation announcing the departure of two members of his team and the appointment of others. He then ended the memo with a team goal: to achieve ‘swing’. 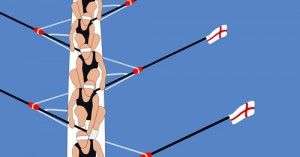 What is swing? The swing of a boat is achieved on the rare and precious occasions when a team of eight rowers are so completely in synch that they move as one.  His email makes it clear that he's made his management changes using a willingness to be a team player as a key criteria.  This is a powerful cultural symbol.

Most organisations we work with are aspiring to achieve better collaboration and co-ordination between people.  Most, however, underestimate the personal development challenge this poses.

To be both a team player and a driven person sets a high bar. Internal competitiveness, silos and political point scoring have always been a part of the human make-up.  They're portrayed to superb perfection in the Netflix production of House of Cards in which Kevin Spacey plays the ruthless, scheming political figure whose every move is designed to advance his own power.  You'll find a similar plot running continuously through Shakespearean plays and Italian operas. These patterns of behaviour have dominated human interaction for a long time.

To achieve a One-Team culture – one of the six cultural archetypes Walking the Talk works with in our methodology - requires a critical mass of senior players to move beyond this behaviour. A change is needed at what we call the BE-level – the way in which a person thinks and feels, the beliefs and values which underpin their actions.

Here are three mindsets that represent a step beyond how most people think.  Achieve these, and your boat could swing. How many do you hold?

RECIPROCITY: Your success is as important as my own. What goes around comes around – if I help you now benefits will flow to me

ABUNDANCE: There are infinite opportunities out there for me – my career advancement does not therefore depend on my beating my teammates to win promotion

TRUST: I can be accountable for deliverables without controlling all the inputs – others will do their part

When I work with executive teams who get close to this ideal they know that such behaviour requires continual vigilance, because it represents advantage that's beyond most.  They experience the business benefits to customers of achieving this goal.   They dedicate considerable time and personal self-reflection to achieve this.  Both are led by someone who set–as Nadella is setting–swing as the top priority.

Let's end with a quote from Nadella's memo:

Lastly, I wanted to share a final thought from a  book I recently finished about the University of Washington rowing team that won the Olympics in 1936 that was written by Daniel James Brown, who worked at Microsoft for over a decade. It’s a great story of how commitment, determination, and optimism among groups can create history. There is a very evocative description in the book about a team of rowers working together at the highest level – he calls it 'the swing of the boat':“There is a thing that sometimes happens in rowing that is hard to achieve and hard to define. Many crews, even winning crews, never really find it. Others find it but can’t sustain it. It’s called ‘swing.’ It only happens when all eight oarsmen are rowing in such perfect unison that no single action by any one is out of synch with those of all the others….Poetry, that’s what a good swing looks like."